Transforming a startup into a world leader

Atlas Antibodies is recognized as one of Sweden's most promising young technology companies. UP was asked to rebrand the company from the ground up, positioning it as a world leader in selling high quality antibodies with a unique and strong differentiation.

Researchers from the prestigious Human Protein Atlas academic project founded Atlas Antibodies in 2006. They wanted to make available the unique antibodies used in the project to fellow researchers, through a commercial enterprise. The Triple A Polyclonals, manufactured by Atlas Antibodies in their facilities in Sweden, are now successfully distributed worldwide. The company is recognized as one of Sweden's most promising young technology companies.

Atlas Antibodies established itself as an entrepreneurial off-shoot of the Human Protein Atlas, an academic project run by researchers, for researchers. While this was (and still is) an impressive heritage, the company needed to compete in a highly competitive market. UP was briefed to rebrand the company from the ground up, positioning it as a world leader in selling high quality antibodies with a unique and strong differentiation.

We started in 2012 conducting in depth interviews with key members of the Atlas Antibodies team, from the President and Chief Marketing Officer, to key staff in the lab and packaging department. We soon developed a real feel for the company and understood what makes them tick. This was followed up by a brand workshop with representatives of the company and the Human Protein Atlas project. Finally, for a full 360o view, we carried out background research with customers. From this mass of information we created a solid value proposition and communications direction.

We designed a totally new brand look and feel, based on the new communications platform, and carried out ongoing advertising. The campaign was initially underpinned with the line ‘Totally Human’ – helping transition the company from Scientists to Humans working with human antibodies. It also established a unique visual identity. In 2015 we developed the campaign further, adding the line ‘Made in Sweden’, to differentiate them from the majority of antibody companies that were from the United States. Through using employees in our new "Let’s Talk" campaign we continued the ‘human’ theme. 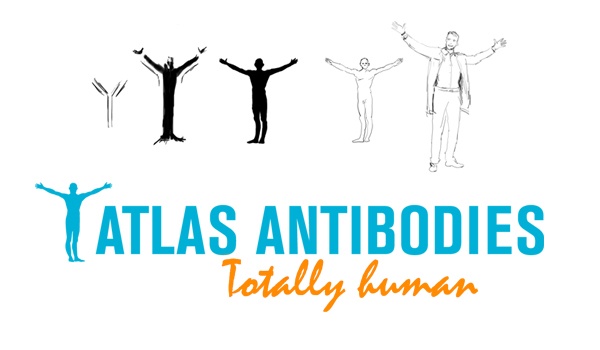 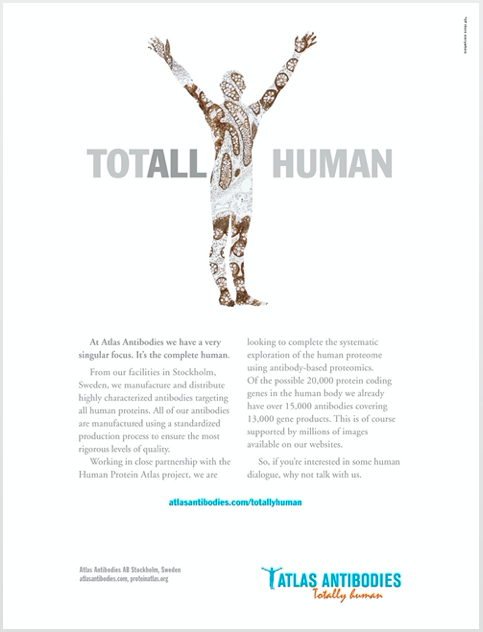 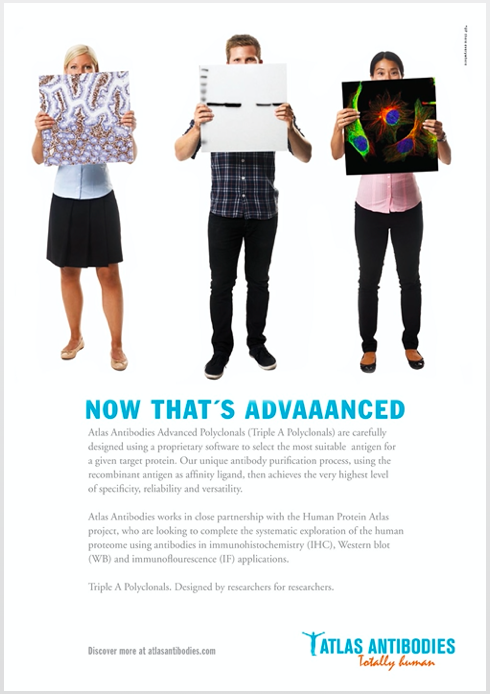 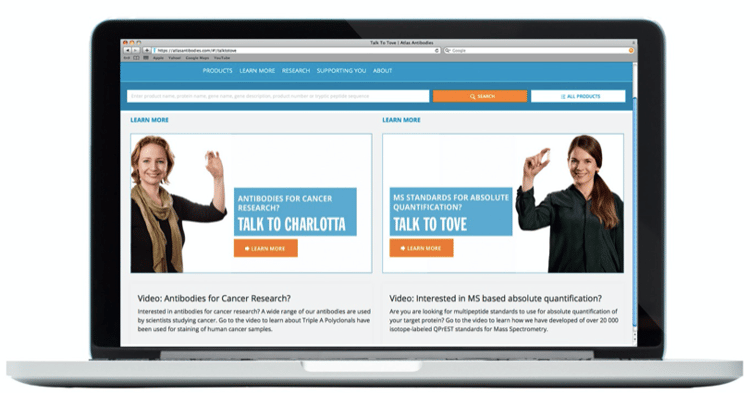 What began as a rather esoteric and academic company, with our help, Atlas Antibodies moved to a position where they were regarded as real people offering global solutions. The entire company was able to live the brand – as it wasn’t a fabrication but a heart-felt representation. Brand materials are now used everywhere in their offices and the perception of the company among their target audience is of a successful, global business.

Recently Atlas Antibodies achieved one of their goals to be listed in Biocompare, a global antibody search site. This really puts them on the radar. This is backed up by Sweden’s financial paper, Dagens Industri, who recognized them as one of the fastest growing Swedish technology companies.

Find out more about Atlas Antibodies and see the brand identity in action.