As cities grow in size and importance, the image of the city is coming under the control of savvy communicators who know what it takes to create a successful destination brand.

A new breed of ‘city stylists’ and ‘cool coordinators’ are shaping perceptions.

A few years ago, when global urbanisation passed the tipping point of 50%, a new era was heralded: for the first time in the history of the planet, more humans were living in urban areas than in the rural environment. Cities have always been key focal points for developing culture, trade and politics as wealth, prosperity and communications propel us ever-forwards through history.

“Like a piece of architecture, the city is a construction in space, but one of vast scale, a thing perceived only in the course of long spans of time.” Kevin Lynch, The Image of The City, 1960.

Cities are complex organisms that shape-shift across history, sometimes influencing, or being influenced by, the fate of the mother state. Cities are dynamic environments, constantly in a state of flux, renewal, growth, expansion, and with numerous stakeholders, all with a vested interest in how the city functions and also how it is perceived at local, and global levels.

Today, perhaps more than ever, cities are competing with one another. In the age of the digital nomad, where borders are soft, and employment is location-independent, cities are competing to attract their future citizens and to retain top incumbents. Cities have become brands, many positioning themselves as post-industrial creative hubs intent on seducing the mobile and fickle creative classes.

As economies depend more and more on intellectual property, these city brands have had to up their game to woo potential citizens. Architecture has always been one of the key tools in city branding and provided a boon for so-called ‘starchitects’ as each city ticks-off their ‘must-have’ lists of Hadids, Fosters, Pianos, Koolhaas’s and Liebeskinds.

“Architecture is central to this urban rebranding, the skin on a town or city’s face.” Tom Dyckhoff, The Age of Spectacle, 2017.

By attracting human capital in the form of intellectuals and artists, thinkers and makers, cities can become hotbeds of innovation, generating creative capital that in turn stimulates further development and economic growth. Attraction, thus, is a key aspect in enticing new burgers to settle down and set-up shop. A strong city brand can go some of the way in attracting interest.

However, it is the ‘content’, the way in which a city can fulfil its promise, that is the ultimate litmus test. Hype can grab attention, but if there is little to substantiate the claim, or a lack of underpinning, then attention will be cast elsewhere and one only has to look at the history of utopian communities, such as Robert Owens’ New Harmony, in Indiana, USA, for evidence of how high ideals and promises vs actuality aren’t always guaranteed to produce a successful outcome.

So, this begs the question: who owns the image of the city?

“Not only is the city an object which is perceived (and perhaps enjoyed) by millions of people of widely diverse class and character, but it is the product of many builders who are constantly modifying the structure for reasons of their own. While it may be stable in general outlines for some time, it is ever changing in detail. Only partial control can be exercised over its growth and form. There is no final result, only a continuous succession of phases. No wonder, then, that the art of shaping cities for sensuous enjoyment is an act quite separate from architecture or music or literature. It may learn a great deal from these other arts, but it cannot imitate them.” (Lynch)

Many municipalities will claim that they own the image of their city. However, in today’s online world, Googling images of a city will often deliver swathes of visitor-generated content that reflects how the city is perceived – not necessarily how the municipality wants to portray it. As with many brands – the true owners are often not the brand itself, but its consumers.

Cities are people, not concrete

In 2016, I attended a forum in Rotterdam, discussing precisely this topic. Google searches on the term ‘Rotterdam’ produced unending images of the city’s edgy architectural icons. However, the people, and the culture of the city were rarely portrayed. ‘Betonville’ – was my own personal name for this phenomenon and the city’s overt leveraging of edgy architecture - a term that was somewhat validated by a speaker from the municipality’s city marketing department, who stated: “it’s all very nice, but concrete has no soul, and we miss the balance of the human element in the portrayal of our city.” Consequently, a strategy was devised to populate the citybranding image bank - part of the marketing Toolkit – with manifold shots of people on the streets in an attempt to display the character and multi-ethnicity of the city, on a human scale.

“Potentially, the city is in itself the powerful symbol of a complex society. If visually well set forth, it can also have strong expressive meaning.” (Lynch)

However, this is all still very much in the ‘self-promotion’ category, pressing the ‘send’ button and launching one’s desired vision into the ether. The narrative is much more convincing when an independent third-party shapes the perception and, in the past, this would have entailed press junkets, plying reporters with lavish food and accommodation and hoping that they would be favourable to the cause. Those days are long gone, however, partly due to the breakdown of conventional media giving rise to new breeds of independent journalists and writers.

Bringing in the press

Furthermore, to corral this new breed of reporters, bloggers, vloggers and foodies, still requires a well-considered strategy and coordinated vision if the city in question is to be represented optimally. Rotterdam has been one of the most successful cities in creating a buzz around its ongoing development in recent years. Always the poorer, less glamourous relative of long-term show-stopper Amsterdam, Rotterdam has had to fight damn hard to emerge from the shadow of its northern neighbour – now a mere 25 minutes away by regular high-speed train from the stunning, new, swoopy Rotterdam Centraal Station.

The city’s previous claim to fame was based around Europoort – the sprawling harbour area west of the city stretching some 40km to the North Sea coast. It was this 24-hour hard-working mega-port that distilled the rolled-up-sleeves and no-nonsense, down-to-earth spirit that the Rotterdammers effortlessly embrace and embody. That, and the resolution to rebuild the city after it was devastated by bombing raids during WWII.

The official city slogan ‘Make it Happen’ is firmly in tune with that characteristic. Now, as the modern city centre seeks space to expand, the former dockyards and industrial wharves are being turned into innovation docks, maker spaces and places of industrial-spectacle-verging-on-art as personified by artist and innovator Daan Roosegaarde’s Dream Factory in the city’s upcoming Innovation District M4H.

Telling the story of a place

Despite the huge challenge in re-tuning the city’s somewhat drab industrial image into something altogether more melodious, it can have escaped nobody’s attention that Rotterdam is sweeping away the title of ‘must-visit destination’ across a plethora of media, varying from CNN and Huffington Post, to Vogue and The Guardian, throwing some serious shadow on Amsterdam, it’s old, historic competitor. It seems like every day the city is popping up in different media – a report in Spanish on the BBC World website or films on German TV around resilience and sustainability in the harbour city.

This success is largely attributable to the efforts Rotterdam Partners – a focussed and dynamic organisation driven to put the city on the map. Moreover, within Rotterdam Partners, it is International Press Officer, Kim Heinen, who is being lauded for a strategy that makes other cities and destinations sit up and take notice. She has been referred to as the ‘city stylist’ by local blog ‘Vers Beton’ (fresh concrete): a title that is entirely appropriate. 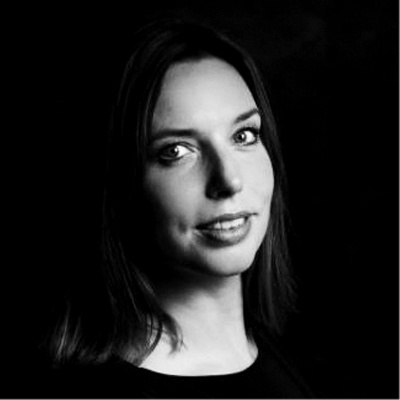 If we come back to the key question around ‘who owns the image of the city?’, then Heinen plays a key role in the formation of that perception. It may sound somewhat frivolous; however, if we consider cities as brands, then a city stylist makes complete sense. British architecture critic and writer Tom Dyckhoff, in his recent book The Age of Spectacle, notes:

“Michigan’s Department of Labour and Economic growth even employed a Smart Cities Coordinator. Every town from Beijing to Nuneaton wants to be the world’s creative capital. No wonder, thinks (Richard) Florida3, who found that 30% of the American workforce and half the country’s income came from the ‘creative class’. Who wouldn’t want them in your town?”

While perhaps not the outright ‘owner’ of Rotterdam’s current city image, Heinen is certainly the conductor of an orchestra of visiting press from around the globe, getting them to rhapsodise in harmony about the many facets of the rapidly changing city. She has managed to portray a Swan Lake rather than an ugly duckling, by knowing how to provide the media with what they want. Her skill comes in linking and orchestrating the many city partners (embodied in the name Rotterdam Partners). By helping journalists with their choices and selections and arranging quality experiences and in-depth interviews with key figures relevant to the topic in hand, she is able to construct customised tours and visits where the media truly see the best that the city has to offer. 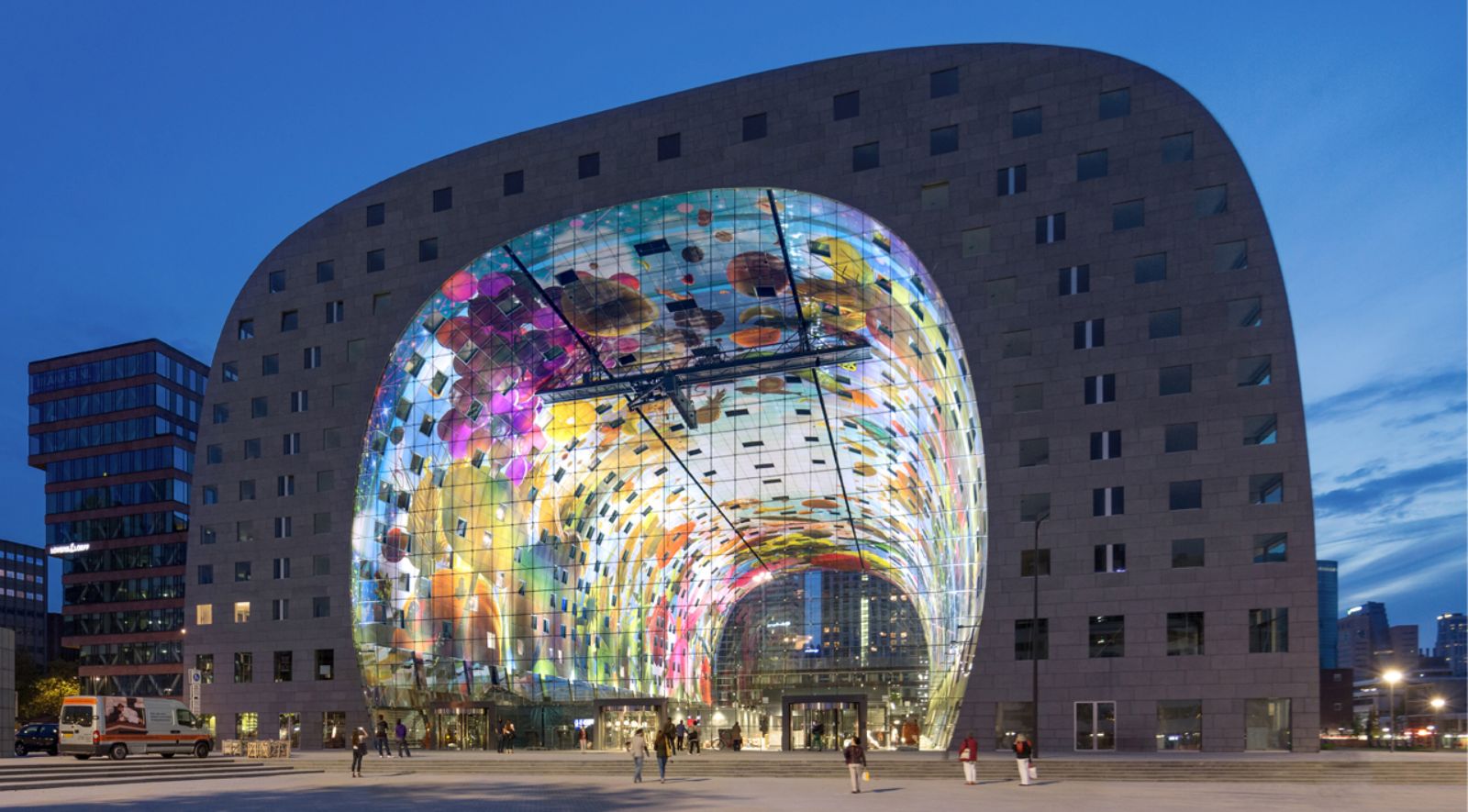 The Rotterdam Markthal ('Market Hall'), which opened in 2014, is an architecturally interesting residential and office complex in the shape of a horseshoe featuring artwork depicting enlarged fruits, vegetables, seeds, fish, flowers and insects.

Rotterdam Partners doesn’t have bottomless coffers with funds to relentlessly promote the city. Heinen has managed to harness free publicity in her somewhat guerrilla approach, helping to preserve integrity, but above all, ensuring that the glowing reviews and reports are not the result of financial incentive. In the same interview in Vers Beton, Jeroen Everaert, one half of the creative team Mothership, who are responsible for the gigantic mural on the vaulted ceiling of the breath-taking Markthal, hits the nail on the head when he identifies the crucial symbiosis between the city developers and the story that Rotterdam Partners promulgates: “If you don’t have content, then the invited journalists have nothing to write about.” Heinen provides the underpinning, the evidence, the quality content that goes a long way to establishing Rotterdam as a vibrant, credible, attractive destination that people are queueing up to visit.

Kim Heinen is one of the featured speakers at the upcoming pan-European destination branding event titled: ‘Place branding? It’s not about the logo’, to be held in Liverpool from May 31st to June 1st, 2018. Taking place at the city’s iconic Titanic Hotel, and marking the 10th anniversary of Liverpool becoming European Capital of Culture, guests from key European cities including London, Amsterdam, Barcelona, Stockholm and Hamburg will engage in healthy debate – revealing the strategies that have put their cities firmly on the map.