A guide to using hashtags on social media

Hashtags. #Hashtags. I’d say most of us are aware of them – to varying degrees admittedly. We’ve seen the good, the bad and the ugly (hello #susanalbumparty). And while we can’t all be social media aficionados overnight, we’re here to help you get to grips with things in the meantime. Every day is a school day, right?

So, let’s get started on our guide to using hashtags to help optimize your social media engagement.

What is a hashtag?

Think of a hashtag as a search term. They are like keywords or key phrases that you’d use for your web content. SEO for social media if you will. For example, if this article was shared, we could use hashtags like:
#HashtagGuide #HowToUseHashtags #SocialMediaOptimization

Similar to when you are developing your keywords, steer towards those with lots of results for increased reach opportunity. Yes, there’s more competition, but there’s also more demand. Most social media platforms will give an approximate number of posts or followers for the hashtag you’re looking to use, as well as other popular variations:

And for our friends using screen readers, make sure you’re using CamelCase. That is, capitalizing the first letter of every word. RNIB says:

This means that the words in the hashtag are read out correctly by screen readers. It also makes them easier to read for everybody else. For example, you would write #HowISee, rather than #howisee.

Which platforms use hashtags

Twitter is the OG when it comes to hashtags. However, they are also used across most platforms including LinkedIn, Instagram, Facebook, TikTok, YouTube and Pinterest. Each have their own etiquette on how, when and where to use them but let’s focus on the main players that you’re likely to be using for your business.

First: the top questions on how to use hashtags

#1 How many hashtags can you use in a post?

The maximum number of hashtags you can use in a post differs on each platform:

#2 Are hashtags better placed in the post or comments?

Ah, the social media chicken or the egg debate. Some say hashtags absolutely MUST go in comments, whereas others (like me) don’t see a difference other than aesthetic, so just pop them at the end of the caption (on Instagram) or your main post (in LinkedIn, Twitter, Facebook).

Instagram’s Creators account where it shares tips on how to grow your audience. Here, Instagram says you should use relevant keywords and hashtags in the caption and “NOT” the comments. Instagram’s search tool is like going down a rabbit hole, so hashtags are one of your best and only bets at increasing your reach. So, if you’ve been dumping all your hashtags in comments then you should probably stop that.

That said, research suggests if you have over 100,000 followers, it is better to place your hashtags in the comments. However, chances are, if you have that many followers, you probably don’t have any real need to bother.

For more data on where you should place your hashtags based on followers, have a look at this:

#3 Where can I find the best hashtags for my content?

Once again, all platforms will have their own in-app insights. For example, Twitter shows what’s trending, Instagram has the explore tab and LinkedIn makes suggestions when you’re posting: 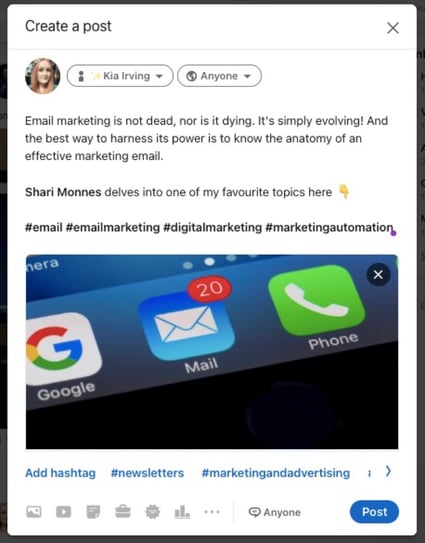 In general, we recommend researching the number of posts and followers that relevant hashtags have. You can use services like RiteTag, HashTagify or Keyhole to research the volume of followers and reach for various hashtags.

If you’re stuck for ideas, here’s a good starting point for hashtag inspiration: 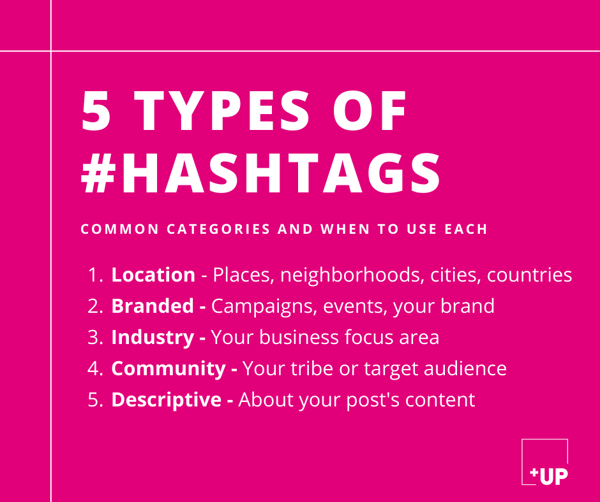 Next: some data on hashtag usage

It wouldn’t be much of a best practice article without some data! 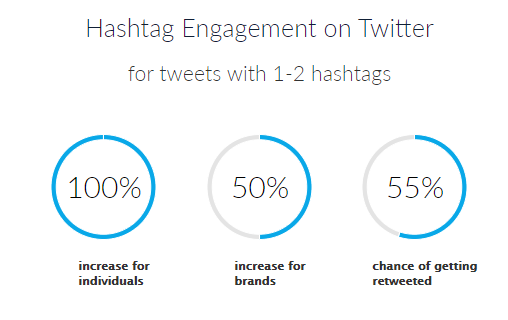 Generally speaking, hashtags don’t get a lot of engagement or usage on Facebook. And what’s more, the Meta gang are pretty vague about how they work and their effectiveness… In this instance it is very much trial and error.

Hashtags are helpful when you are trying to expand your reach with a Facebook campaign. Just make sure that your Facebook post is set to public so that even people who aren’t following you can see your post with your hashtags.

As a best practice, write your copy and then see if certain keywords can be made into hashtags. #Do #not #hashtag #every #word. Not only will this look like spam, there’s no point in tagging words that aren’t important.

Here are some key punctuation do’s and don’ts:

And just like that, you should now be armed with a good starting point to begin leveraging hashtags for social media—from the sweet spot of how many to use and where to use them, to finding the most relevant ones for your content.

Read more: How to develop a winning social media strategy

Reach out to UP for Social Media Services.