Warner Brothers, the media company responsible for this years' Nobel Peace Prize Concert, appointed UP THERE, EVERYWHERE in September to continue to work with them on the marketing and promotion of this year's concert.

The concert had a new format and moved to the larger venue of the Telenor Arena in Oslo. The concert took place on December 11th, the day following the awarding of the actual peace prize itself. This year the stars included Jason Derulo, Kygo, A-Ha and the event was hosted by Jay Leno. 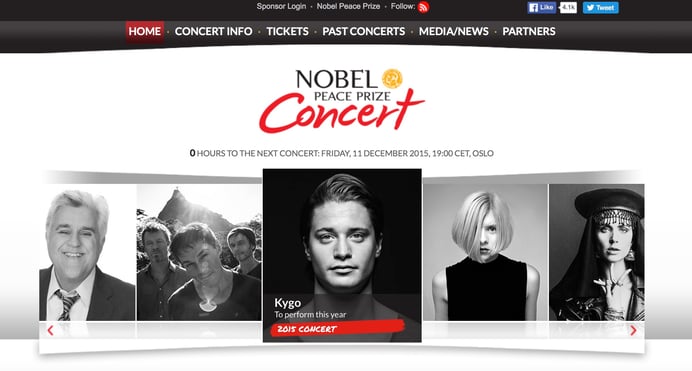 Julian Stubbs, CEO and Founder of UP THERE, EVERYWHERE said: ‘We are always really happy to be working with the concert. We have been involved with the concert for four years and it’s a truly unique event.

Dag Hvaring from Warner Bros. Oslo said ‘We were delighted to continue working with UP THERE, EVERYWHERE. With a global audience and reach using an international agency such as UP makes a lot of sense.’

UP THERE, EVERYWHERE created the identity for the Nobel Peace Prize Concert as well as all of the digital and offline communications. The agency had a team of 6 people, based in both Sweden and the US, working on the event.

UP THERE, EVERYWHERE headquartered in Stockholm, Sweden, is the world’s first global cloud based agency. The organisation works with clients around the world developing brand, identity and digital communications. The agency utilises cloud based tools and processes.

Find out more about this project