Can't help it but I love taking trains. I work well, I can relax, have a good think and get a better perspective on most things. At the moment I'm on the Amtrak from Princeton to Washington DC and I have to say it's far preferable to taking a nasty, crowded plane – even if I don't get the joy of airport security and the pleasant banter and wit of the TSA security operatives at the airport (not). 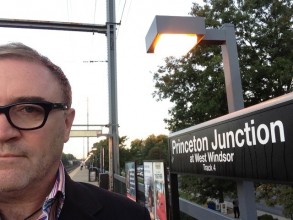 Last week I was giving a speech on City Branding in Liverpool and took the train out of Euston to Liverpool and was amazed that it only took two hours and ten minutes. Absolutely wonderful. Making the news in the UK was the debate about what they call HS2 - a new High Speed train route. In fact the biggest high speed train route investment in the UK for a very, very, long time. And they are debating the value and cost. Now everyone would want the thing to come in on budget but I would say how can you not afford to do it? Consider the impact on our roads, airports and lives of not doing it.

One of my favourite movies of all time is Some Like It Hot by Billy Wilder. It featured a memorable scene on an overnight train with Marylyn Monroe, Jack Lemon and Tony Curtis, so maybe that's where a bit of the romanticism with American rail travel comes in for me. Trains also give you a unique perspective on a country and city. You often see the seedier side of a place, but you also get a glimpse of the real place and its history. You get a different viewpoint. Hence I rather like the Amtrak tagline 'Change How You See The World.' Does it for me. And I would love to get to work on a major brand project for a rail company. There I said it.

Anyway, will soon be arriving at Union Station DC which has to be one of my favourite stations in the world. But don't get me started on stations. I could write a book on that topic alone.