By Asra Eftekhari
UP NEWS

UP THERE, EVERYWHERE, the global cloud based agency, has been featured in a Nasdaq.com article. The article titled 'Leading from a Distance: How to Manage Remote Employees' makes reference to E-Ployment and the flattened globalised world we live in needing new business models. A link to the article is given below. 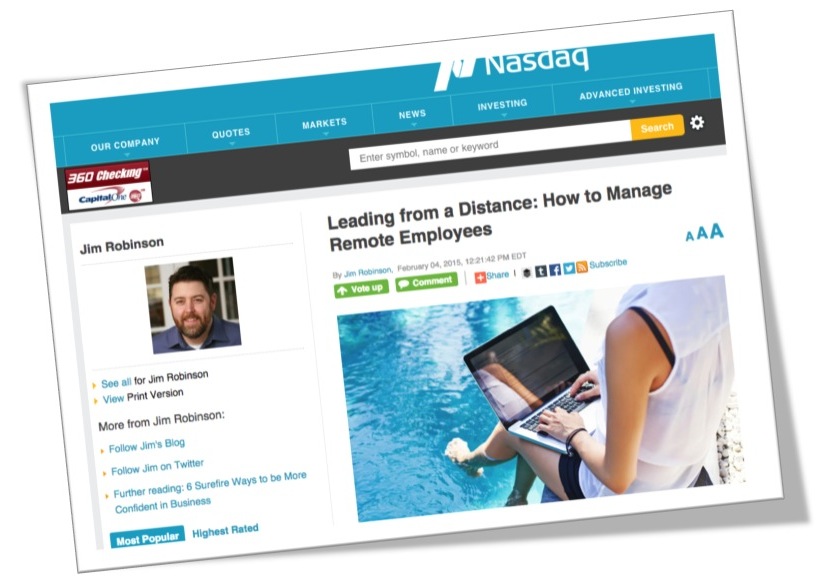 Read the article at NASDAQ.com.

UP was also featured in the UK's Daily Telegraph recently. That article was titled: "Working Online: The Rise of E-ployment," by Samantha North.

The article quotes Julian Stubbs on why he took the dive into E-ployment:

"I was sick of sitting in traffic for up to two hours a day going to and from an office. That adds up to around 18 days a year. I’d sooner take a holiday with my family. It was also non-productive time and a real waste. Nowadays we have all the tools to work really well in the cloud – so doing that was the obvious answer."

UP's business model will also be the feature of a TED talk at the end of February by Julian Stubbs, Founder & CEO of UP THERE, EVERYWHERE.

For more on E-Ployment and to download a sample of our book go to the links at the bottom of this page.

E-Ployment: Living & Working in the Cloud

What happened to books, music & films is about to happen to the service sector & employment within it. Freelancers have suddenly formed globally connected, & organised communities, enabled by the cloud & the new tools that are available. Today they can work here, there & everywhere. It’s happening & it’s happening fast.

As we know the world is changing rapidly. Things seem to be converging more and more as our personal and work lives become increasingly intermingled. Today, we think nothing of watching a fun, viral, video on YouTube at ten o’clock in the morning or answering business emails at ten at night. Work and life have become blurred. This is the picture for many of us who work in service industries.

Traditional employment is fast becoming a thing of the past. But where will it lead next? The aftershocks of the financial crisis are profoundly affecting the way governments and corporations, that have long been the main sources of traditional employment, are now viewing today’s workforce. If we have a safety net at all, it has holes that are growing larger all the time. We’re being encouraged to become more independent so that we don’t cost governments so much money.

Corporations are shedding us and outsourcing so that they can save money and earn more for their shareholders. In this scenario, we have little choice as to whether or not we become independent.

If we become successfully self-employed and work in the cloud, we are then faced with the challenge of finding the right work-life balance. But, we’re told, the consequences of failing to our get our work-life balance right can have disastrous effects on our well-being and our families. We’re also in danger of becoming isolated and lonely without an office to go to and a water cooler to gather around. So there are issues in entering this brave new world. But there is a third way of working, and that is ultimately what this book is about. I know it works because I’m one of its pioneers. I say this simply because it’s true. I don’t necessarily have any more insight than anyone else. However, along with a small group of other people, I arrived at this way of working out of necessity, and not because I wanted to build an empire. (Although I have to say that a modest global empire is quietly building itself.)

We’ve written this short book to give you our take on how employment in the creative services industry, and possibly the whole service industry itself, could be impacted by new business models such as ours. We call our model E-Ployment.

It paints a picture of the world beyond traditional employment, enabled by the cloud, digital tools and a hybrid of remote working. E-Ployees will increasingly form and work in highly connected “global communities”. They will often derive their income from multiple sources and will certainly be more focussed on achieving a healthy work–life balance. They are also people concerned with the environment and there are some big upsides there as well, as fewer people will need to face a daily commute. We’re a small company with a big idea. I wrote this book because I wanted to share that idea with others. I know that working anywhere and everywhere in the cloud offers a huge amount of freedom and massive benefits for people like us and like our clients. This book talks about employment, self-employment and introduces the third new way – E-Ployment.

'We wanted to create a third way - not employment, not being freelance but a third way and that’s E-Ployment. Providing the support of employment, with the freedom of being a freelance worker all enabled via cloud based tools.’

- Julian Stubbs, Co-founder of UP THERE, EVERYWHERE

'Ad agencies and marketing service companies should be extremely nervous right now about the freelance networks going out to compete with them. Networks made up of people achieving a better work/life balance, becoming more free and taking control of their own lives and future. This book tells you why they're succeeding and how you could too.'

‘There is a shifting tide in consciousness. A shift towards nurturing the whole human being in employment, a shift towards caring for their whole life. A growing number of people, employees and employers alike, are beginning to question the traditional, narrow metrics of what is means to be successful. Who is wealthier: a person who commutes an hour to work for 12 hours, and returns home to miss their baby’s bath time? Or someone who commutes to their home office, has lunch on the beach, and runs the bath themselves? This book strikes to the heart of such questions. Its time has come.'

'UP is inspiring and when I talk about you people say "Wow!" UP defines the new economy and is evidence that a new way of working and a conviction to be sustainable really can give you a better competitive position. Anyone thinking seriously about changing the way they work should read this book.'

Free copies available for media only. Please contact Jenny Aarnio at UP THERE, EVERYWHERE.