The CTO, The Sailor and The Guitar Maker : Real-World Stories of Inbound Marketing Success

At the INBOUND 2014 conference in Boston, I had the briefest of spontaneous meetings with Dharmesh Shah, CTO and co-founder of HubSpot, a shy man by his own admission. As I was talking to him, his discomfort with strangers was plain to see. It might have been my imagination, but I think he was working hard at not running away. I made the meeting as painless as possible, and wordlessly he thanked me for that. The overall impression that Dharmesh left was overwhelmingly charming.

Dharmesh has created HubSpot, the inbound marketing platform that respects the way that people search for and trust information. All businesses, B2B and B2C, local or global, will be profoundly affected by the dominating new mechanisms of information gathering, idea sharing that ultimately lead to a purchase decision. In this article, I want to make it easy for you to understand what this can mean as leverage, for even the smallest company. Or even a single person.

At the conference, Dharmesh delivered a fine keynote address about his early days at Harvard, his first encounter with co-founder Brian Halligan, who at the time was working on getting various venture capital start-ups off the ground. At the time, Dharmesh was writing a blog containing useful information aimed at helping people with a technical solution. While Brian’s Internet start-ups were struggling to get their websites noticed, Dharmesh could boast of exponentially growing numbers of blog subscribers. People were visiting Dharmesh’s website and blog because he had something of value to share. People were not visiting the start-ups’ websites because they only had something of value to sell.

Be helpful: get found

The whole point of good inbound marketing is to be helpful. It’s no more complicated than that.

This lit a spark of recognition in me, a thought that I’m sure you will also recognise. Many of us have friends who are active bloggers. They blog in their free time about subjects that are close to their heart. My friend Roger has a blog about his particular type of sailing boat. Although it’s a niche model, the blog is well followed and it fulfils Roger’s delight with sails, racing, design, photography, good food and drink. Another friend of mine, Ola Strandberg, also has a blog about his particular hobby: guitar-making. 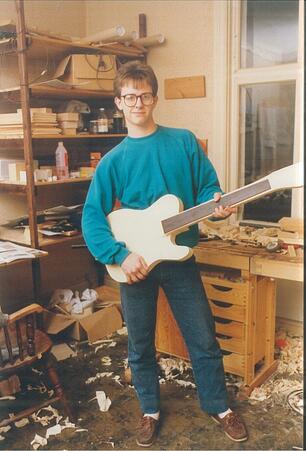 Ola has always had a hobby of modifying guitars for better sound and playing performance. He’s in love with progressive hard rock, and the intricate guitar solos of axe heroes like Allan Holdsworth and John Petrucci of Dream Theater. In fact, he’s been in love with guitars and guitarists ever since I met him at the age of 17.

In 2007, as childcare became less intense, he decided to pick up his old hobby again, and at the same time experiment with a new Internet thing called a blog. He wrote a few lines in it every now and then to keep track of his work, mostly for his own benefit. The blog read like a diary and recorded progress and failures, as well as his personal thoughts at the time. He had no intention of attracting an audience.

Build it right, and they will come

Over the year, by search, like-minded people discovered Ola’s blog. They subscribed and followed the trials and victories as he was making a new bridge design. He machined a single set of the bridge for customising his own guitar. Many people were interested, so Ola generously shared the blueprint with the people who asked for it. When they found they did not have the time or resources to make their own custom bridge, Ola kindly offered to manufacture one for them at cost. He had no intention of starting a business.

When Ola announced on his blog that he was going to start on a completely new design for an ergonomic guitar, the interest from his followers was immediate. Ergonomic guitars already existed, but they often got no further than drawing board concepts, or they were were just plain ugly. Ola wanted to make a beautiful guitar, crafted specifically to his own body posture and arm length, of the choicest woods, and thereby tackle, once and for all, the ultimate issue of performance – the idiosyncrasies of the player himself.

After solving some tricky mechanical challenges, Ola released photos of his first prototype in September 2010. The news exploded onto the guitar world. Subscribers picked up the news and shared it on Facebook and Twitter. Ola didn’t have followers anymore; he had fans. At the same time, Ola was awarded “Guitar of the Month” on the guitar builder forum, Project Guitar.

The breakthrough came when the lead guitarist of Scale The Summit, Chris Letchford, ordered a signature Strandberg guitar. Letchford toured extensively, which created visibility for Ola’s guitar. One of the people who then tried Ola’s guitar was Tosin Abasi of the band Animals As Leaders. The video where Tosin plays a Strandberg guitar caused all hell to break loose as the news spread across the Internet.

Ola augmented his inbound marketing–because that’s exactly what it is–with various outbound events like attending the NAMM show in California. When he is there in person, he is treated like a rock star. This year, on top of his serial production in Chicago, he launched production in South Korea to meet the growing Asian demand. None of this was part of the original plan. There really was no plan.

Why did it work?

Ola does feel that he is missing one key piece of information: he needs to know how he is succeeding. Recently, the number of Facebook likes has gone through the roof, now close to 60,000, and blog subscribers have grown significantly. But he doesn’t know why. If he did, he would be able to optimise his marketing. (I think he needs HubSpot.)

Inbound marketing illustrates today’s power of the single individual or a small company to convert a passion to a business. As Brian Halligan of HubSpot says, “We can’t out-market the giants, but we can out-think them”. And the strategy to do it? Simply be helpful.