Has it been done before, a group of writers creating one novel? ‘As I Died Lying’ is the new novel written by fifteen writers and it is now being published through the crowd sourced UK publisher Unbound.

The book received a review in the UK's Guardian newspaper and since then interest in the project has soared. Julian Stubbs, one of the founders of UP THERE, EVERYWHERE is one of the authors of this unique project. He talks about it here:

‘I've always loved writing and part of my work at UP is as a senior creative copywriter. We've been involved at UP with a UK based writers development group called Dark Angels for about five years now. Dark Angels offer a series of senior residential writing courses at different locations throughout the UK and Europe. The writers who attend their sessions are a pretty diverse bunch who come together to hone their talents through the writing program and collaboration. Dark Angels really helped drive the idea of writing a collective novel to see what would emerge.

So using William Faulkner’s novel ‘As I Lay Dying’ as inspiration, due to its multiple character viewpoints, we spent a weekend in a remote Scottish country manor house. Immediately, we started to use our environment to create the characters and plot and we soon embarked upon a story about a woman who dies in rather strange circumstances at a Scottish country house. As I Died Lying’ is a really unique project. I believe its the first of its kind as a book. It has some comic, poetic, psychological and philosophical moments. When the book project was then reviewed in The Guardian newspaper in the UK it really took off as an idea and that's when we knew we had something rather special.

We don't think a collectively written novel has ever been created like this before and with UP's cloud based approach the idea of a crowd funded book also really appealed to me. The publishing business is in the doldrums and needs a shake up and Unbound is doing just that with their approach.’

- Julian Stubbs, CEO and Co-founder of UP There, Eveyrhwere

Stubbs, who lives in Stockholm, Sweden, published his first book in 2011, which was a business book called Wish You Were Here, focusing on his branding work for the city of Stockholm and its positioning as The Capital of Scandinavia. He is a frequent public speaker at events around Europe and the US.

Read The Guardian article on As I Died Lying. 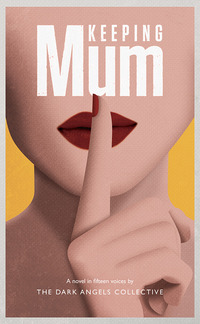 As I Died Lying being published by Unbound.co.uk

(UPDATE: THE BOOK IS NOW PUBLISHED UNDER THE TITLE "KEEPING MUM")

About Unbound - the publisher

Unbound, a revolutionary new way to get books published by involving readers, was launched by three authors, John Mitchinson, Justin Pollard and Dan Kieran at Hay Festival on 29 May 2011.

Authors pitch their ideas for books directly to readers on the website Unbound.co.uk. Readers choose which books they would like to see published and the funding level at which they would like to pledge their support. In return, benefits to readers might include personal dedications, gifts or invitations to the book launch party. All reader levels include an e-book version and immediate access to the author's ‘virtual shed’. When an idea has enough supporters, the book is written. If it doesn’t get enough support, it won’t be published. All pre-target supporters get their name printed in every edition of the book. Supporters of books that don't reach their target receive a full refund.

Since launching in May 2011, Unbound has already successfully funded fifteen tittles including ‘Evil Machines’ by Terry Jones, ‘Crushed Mexican Spiders’ by Tibor Fischer, ‘Museum without Walls’ by Jonathan Meades, ‘How to have an Almost Perfect Marriage’ by Mrs Stephen Fry, ‘Unbelievable’ by Jennifer Pickup and ‘News from Gardenia’ by Robert Llewellyn.