How can you market a frozen northern city? Perhaps an Ice Hotel?

Getting people to visit a destination that lies above the Arctic Circle in the middle of winter and then pay a premium price for the privilege has to be seen as a truly great marketing achievement. But that’s exactly what The Ice Hotel in northern Sweden has achieved. In 1992 an ice seminar was organised by Yngve Bergqvist, who was looking at ways to improve tourism in his home town of Jukkasjärvi, which lies around 17 kilometers from Kiruna in northern Sweden.

An igloo of some 60 m2 containing ice sculptures was built to house the event. Unfortunately accommodation at the hotel Yngve managed had run out and so some hardy individuals agreed to spend the night in the igloo. They slept on top of reindeer skins in sleeping bags and the next morning, by way of compensation I should imagine, were given certificates to prove they had done so.

Twenty years later the Ice Hotel brand has spread and now there are ice hotels in several countries as well as a successful Ice Bar franchise with Absolut Vodka in several major cities around the world. The hotel in Sweden is constructed every December and lasts through to the following April, when it melts. Each Spring, around March, 10,000 tons of ice are cut from the frozen Torne river to store for building the following winter’s hotel as well as for creating the unique products that the hotel markets, such as glasses and sculptures made of ice.
Whenever people or organisations com- plain about the difficulties they face in attracting people to their particular destination, I like to use the Ice Hotel as an example. Despite severe difficulties, any place, given enough focus on what they have that is truly special and some creative thinking, can succeed. Few Place Branding stories can be as inspirational as the one concerning The Ice Hotel in northern Sweden.

Similarly Luleå University, which is around 350 kilometers south of the Ice Hotel, has also used their seemingly remote and frozen geographic location to stand out from the crowd. The university has created some impressive marketing ideas and used them to great effect.

The these ideas are taken from the book, Wish You Were Here - The Branding of Stockholm and Places, by Julian Stubbs. It covers place branding specifically, and also branding in general.

To get a free chapter of WISH YOU WERE HERE, click below. 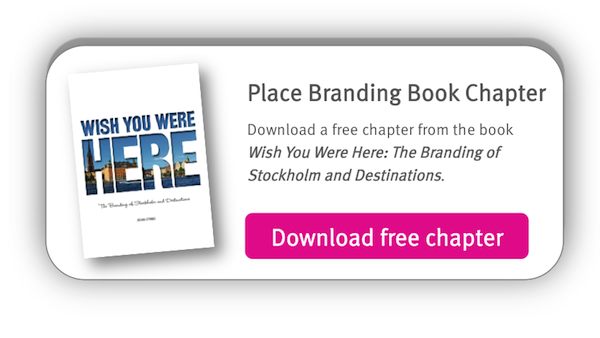