UP Brings a New Global Science Prize to Life

We're really excited to announce a major project we've been working on, behind the scenes, for some months now.

It's called The Science & SciLifeLab Prize for Young Scientists and it has been created to recognise excellence in PhD research. The grand prize winner of this major global award, aimed at young life scientists, will have their paper published in the journal Science and receive $25,000 in prize money. Three runners up will receive a combined total of an additional $10,000. The prizes will be presented to the winners in Stockholm, Sweden in the middle of December 2013. 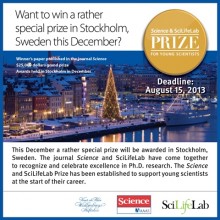 UP THERE, EVERYWHERE has been instrumental in helping develop the new Prize. The agency worked together with SciLifeLab in Sweden and the international journal Science to bring the new global prize for young scientists to life.

'Science has never been more exciting and, as leaders in science, we want to support and encourage young researchers today and tomorrow. This prize is a way of doing just that.' says Professor Mathias Uhlén, Director of SciLifeLab.

Julian Stubbs, CEO of UP commented 'We are very proud of being part of the team that made this prize a reality. We worked with both organisations intensively over a period of months to help establish the prize, and with UP's own strong focus in the Life Science area, it’s something we are passionate about.'

UP has worked with the journal Science for a number of years helping them with their brand, identity and marketing communications.