Will cloudsourcing and crowdsourcing replace outsourcing?

|
Categories
Written by Elizabeth Nelson, PhD | Amsterdam
on May 24, 2016
Businesses have always looked for creative ways to save money on the costs of infrastructure or paying employees. Outsourcing has been popular for decades but often creates negative repurcussions and doesn't always yield the same high standard or cultural understanding. Call centers abroad have long been the focus of bad jokes as well as criticism. But at the heart of this malignment is a cry for something better, and it seems outsourcing is starting to be replaced with creative, innovative and even honorable initiatives. Can new ideas such as cloudsourcing and crowdsourcing change the way we think about employment and product development? 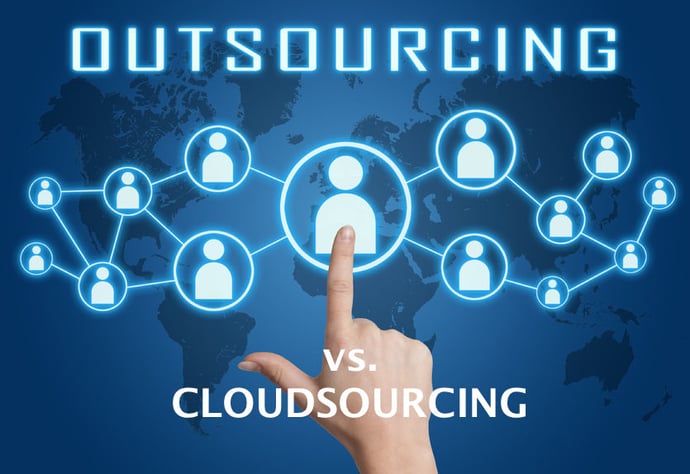 These ideas aren't just being applied in traditional businesses; researchers and healthcare professionals are also changing the game as we see initiatives move toward innovative new ways of working from cloudsourcing to crowdsourcing (and its sidekick, crowdfunding.)

What's the difference between them?

Outsourcing is the act of obtaining (goods or a service) by contract from an outside supplier. Outsourcing as we know it usually includes finding a cheaper supplier in a country that has lower costs either in employee wages or manufacturing. And this is where outsourcing gets its bad name. Child factories and underpaid workers abroad should not be the solution to tight budgets.

Crowdsourcing, on the other hand, refers to obtaining information, content or input into a particular task or project by enlisting the services of a number of people–either paid or unpaid–typically via the Internet. Countless examples of crowdsourced concepts that evolved into real projects or products exist, including Waze, the traffic navigation app, the Dell Social Innovation Challenge (now called Verb), and MIT’s Climate CoLab.

Crowdfunding can also be included in this transformative concept. Many products, services, and businesses have come to life because of crowdfunding. It allows the general public to invest in an idea, or purchase a product at the pre-development stage, providing both a monetary "vote" for the idea and an actual revenue stream that helps get it off the ground.

Cloudsourcing is a similar idea, but generally refers to putting all your IT infrastructure and solutions “in the cloud” – meaning it's accessed over the internet rather than residing in a single physical location managed on-site by the company using it. For example, UP uses cloudsourcing for file sharing through Google and Dropbox, project management with Basecamp, and email and calendar services in the cloud.

You could also include the Gig Economy, the growing economy of contract workers, freelancers and entrepreneurs, into this evolution.

Cloudsourcing is believed to be the future of cloud computing and business as we see it, where organizations of all sizes are rapidly looking to the cloud to meet their IT needs.

Unlike outsourced work, which is usually hour-based, uses fixed employment and is limited to the location of the outsourced office; crowdsourced work is output-based, flexible, and global. If that wasn’t enough reason to try it, crowdsourcing can also provide free marketing. It allows businesses to assess potential market interest, build viral interest, and amass a following before launching an actual product.

Similarly, crowdfunding capitalizes on public interest in a new product idea to generate the revenue needed to bring the product to life. Websites such as Kickstarter.com, make this accessible to anyone. One successful example includes Glowing Plants, a project created by a research team looking to use synthetic biology to create sustainable natural lighting, which raised $484,013 — more than seven times their goal of $65,000.

Some companies use crowdsourcing to help direct their product roadmap. For example, each year Lays Potato Chips hosts a competition with a call for creative new flavors and thousands of people send in their ideas and recipes. This crowdsourced activity draws attention to the product and lets the company collaborate with their customers in a way that helps to stir up passion for their brand. This year’s winning chip flavors were Korean Barbecue, Smoked Gouda and Chive, Fiery Roasted Habanero, and Olive Oil and Herbs. Yum!

Crowdsourcing isn't just for products, however. Lucien Engelen recently gave a TED Talk in which he described the future of medical research driven by patient initiatives instead of research grants and politics. In his inspiring talk, he advocates for new research areas being prioritized and accelerated based on patient needs instead of political motives or financial pressures.

Can you imagine what could be changed if projects were driven by having the right idea and real need instead of simply cutting costs?

A cloud-based model for collaboration

The e-ployment model is cloud-based, but is it crowdsourced? What if you combined the ideas behind cloud-based work, taking the best of all these modern models and created something new by adding organization?

"Some people have asked if e-ployment is a form of crowdsourcing. It's not. Crowdsourcing relies on random collaboration by at-will contributors. E-ployment takes the idea of world-wide collaboration to a new level by creating a hybrid between employment and solo work that is really much more organized than crowdsourcing," said Lawrence Masle, COO and founding member of UP THERE, EVERYWHERE.

So putting work in the cloud, in an organized way, can pay homage to its predecessors while transforming the old ways into something new with unlimited possiblities for growth. Here's to working in the cloud.