What you need to know before buying a microphone

You’ve bought a portable digital audio recorder and now you want to improve your recordings by adding an external microphone. Good idea. The problem is that there are thousands of mics to choose from with a variety of characteristics to consider, and you’re not sure where to start. Let me make that purchase as painless as possible with this handy guide. 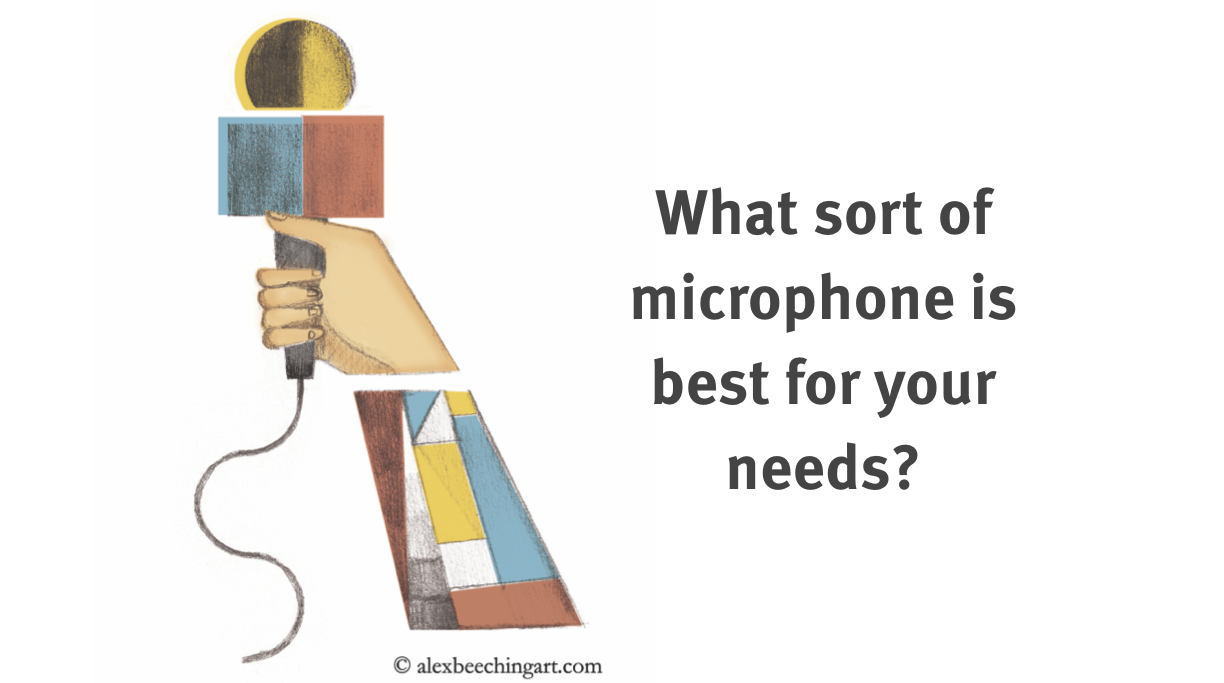 Omni-directional mics are great if you want to capture the atmosphere of an event. As their name suggests, they pick up sound from all directions.

Uni-directional mics pick up sound from one direction so they’re useful for interviews in noisy environments. They’re sometimes called ‘cardioid’ mics because their ‘polar pattern’ is heart-shaped.

Bi-directional or figure-8 mics pick up sound at the front and back. They’re often used for duets or as part of a stereo recording set up.

Highly-directional or ‘shotgun’ mics pick up sound at a distance and within a very narrow angle. Film makers use them because they can be positioned out of shot, usually on the end of a boom.

Which direction should you go?

If you’re not accustomed to using a microphone or if you plan to record in the field rather than in a studio, I suggest you plump for an omni-directional mic. Omni-directional mics fare much better in windy conditions, are less prone to pop when someone uses the letters T, K, P, D, G or B and tend to capture a more natural sound. The Røde Reporter is a decent omni-directional mic. I have one and I use it a lot. Here’s a tip: When using an omnidirectional mic, keep it close to whatever or whomever you’re recording.

The three main microphone mechanisms are dynamic, condenser and ribbon. Unless you plan to recreate old British Pathé newsreels, you can forget ribbon mics. All you need to know about the others is that the majority of dynamic mics do not need a power supply whereas condenser mics do. Some condenser mics have their own battery pack but most will draw power from your portable recorder, cutting your recording time. My advice? Leave condenser mics in the studio. Go dynamic.

If you’re planning a bit of sports commentary then you’ll likely need a Coles 4104 lip mic. They’re turd brown, they look like something from a World War Two-era telephone exchange and, brace yourselves, they cost more than $700. If you intend to conduct studio interviews for video then you’ll need lavalier mics. Sometimes incorrectly called ‘clip’ mics, lavalier mics are the tiny devices you see attached to guests’ collars on TV. A decent pair shouldn’t cost you more than $75. If you have a special project planned and you’re not sure how to record it, drop me a line. My email address is at the bottom of this post.

This is quite an important concept so I’m going to shout it: MICROPHONES ARE NOT STEREO! Stereo recording requires two or more mics in different positions. There’s currently a bit of a ‘stereo’ microphone trend but they’re always either two mics joined together in one unit or one mic with gimmicky software designed to give a stereo effect. Are you planning to record The Boston Pops performing the main theme from Star Wars, conducted by John Williams himself? No? Then forget any stereo nonsense. Go mono.

When holding a mic in your hand, you’ll sometimes pick up muffled scraping noises as you adjust your grip. This is handling noise. As with portable digital recorders, quality microphones will feel heavy and will be prone to less handling noise than cheaper, lightweight units. Imagine the difference between rapping your knuckles on a solid brick wall and rapping them against a hollow plasterboard wall. That’s what I’m talking about.

Microphones often have a foam ball stuck on the business end. They cut wind noise, they’re cheap and you should buy one. You also see mics with grey furry covers. They’re called dead cats and they’re also designed to cut wind noise. Shotgun mics especially should be fitted with one.

In studios, it’s common for the mics to have a metal hoop mounted in front of them with what appears to be a pair of pantyhose stretched across the hoop. This is a pop shield, designed to prevent the mic being overloaded when people project their voices into it. When you’re performing a sound check it’s a good idea to use the sentence: ‘Peter Piper picked a peck of pickled peppers.’

Don’t spend more than you need to

If Andrea Bocelli called to say he wanted to record his new album in my casita, I’d order a Telefunken U47. They’re $10,000 but it would be money well spent. Sadly, I’m not Andrea Bocelli so all I need is a pair of Shure VP64As for indoor interviews and a Rode Reporter for field recording. I’m guessing you’re not Andrea Bocelli either so $50 to $150 is plenty.

A former BBC radio journalist, Mike McDowall creates podcasts. Already this year, more than 124-million adults in the US alone have listened to a podcast and worldwide audience numbers are set to double in the next two years.

To find out how a podcast could launch your company or client into the stratosphere, drop Mike a line: mike@upthereeverywhere.com

If you ARE Andrea Bocelli, I’m happy to kick my brother-in-law out of the casita at any time!