Learn the secrets of inbound and content marketing for life sciences

The community of Sigtuna, Sweden, with the help of UP THERE, EVERYWHERE, has just released the 4th ad in a series of 12 new advertisements promoting their new positioning. The latest ad ran today, April 1st in the popular daily Swedish newpaper, Dagens Nyheter. The ad featured an April Fool’s Day message claiming that Sigtuna will have the world’s tallest building.

The aim of the ad was to have a bit of fun while bringing in some recognition and publicity for the area. Destination Sigtuna is working to raise awareness of their growth & development and to get their new destination brand position as Sweden’s ‘First City’ into the media and minds of the public. 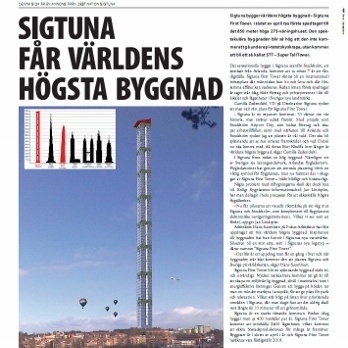 Sigtuna Will Have World's Tallest Building

The ad features the announcement that the commune of Sigtuna will build a Skyscraper 850meters high (higher than the Burj in Dubai) and that this structure, designed by a local architect who used the new Sigtuna logo (the logo features the number 1) for inspiration, is so high that the tower will need to be labelled an ‘STT’ (Super Tall Tower). The Stockholm Arlanda Airport is quoted in the advertorial to comment that they feel this new structure will not be a hindrance for the pilots coming in to land at Arlanda, but instead it will aid their landing approach.

Truth behind the humour

There is a lot of truth in this message, however, as the community of Sigtuna is developing and expanding in both public and private sectors with new business opportunities, the construction of new residences and an increase in employment opportunities. The ad is having a bit of fun on April 1st, but with growth in the community higher than any other community in the greater Stockholm area, perhaps in all of Sweden, then the message delivered is absolutely no joke.

The response to this advertorial has been enormous with the phones at Destination Sigtuna ringing off the hook the entire day. Sweden’s TV4 held a debate early today on their morning news program. In addition the story has been picked up by radio stations and many other news sources across Sweden. It seems this April Fool’s ad caught a lot of people’s attention.