Northern Lights at the end of the tunnel? The selling of Sweden's frozen north.

As an Englishman living in Stockholm, I’ve always thought of the city as being north – but what did I know. Now I've travelled really, really, north. I've come to the pretty little town of Arjeplog, in Swedish Lapland just under the polar circle. Population 1,977.

At this time of year sunrise is 9.53 AM and if you want to enjoy it you better get a quick walk in whilst it’s up there, as it sets again at 1.25pm. I say quick because apart from the limited daylight, it’s also minus 12C outside. I’m assured by locals however that even this is balmy compared to the minus 45C it can get down to. 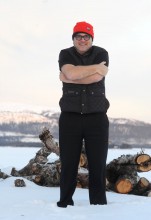 Julian Stubbs. Minus coat at minus 9C in Arjeplog

I’m here giving a speech on Place Branding to a friendly group of local politicians and municipality leaders from across the north of the country. The branding and marketing of such places is becoming increasingly important as Arjeplog, like many small towns in northern Sweden, is facing de-population.

Whenever I visit cities and small towns I always start with the question why does this place exist anyway? In the case of Arjeplog it was originally a mining town, famous for its silver. But that industry came to an end long ago. Today its more likely you’ll see a silver Porsche parked in the little high street. In fact you’ll probably see a row of silver Porsches, because Arjeplog has become a car town. Every winter this small community doubles its population with the influx of engineers from Germany, Italy and elsewhere, when they come here to test their cars in the forests and on the frozen lake in severe winter conditions. When I arrived the high street of the adjoining small town had a number of Porsches parked in it, a new BMW i8, and a Mercedes 'something' heavily disguised as it's still not launched yet.

Alf Sundtröm runs CarTest, the company that builds much of the winter facilities for the international car industry that flock to this little town every winter. He explains how this small town became a nordic car testing Mecca. It all started in a very Swedish, humble way. In the early 1970s a small tourist flight company used the local lake to land on during winter. One day they had a request to use their small winter landing strip to test a new braking system – what eventually became ABS. 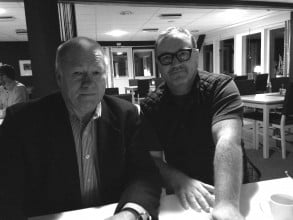 Julian Stubbs with Alf Sundström, of CarTest, in Arjeplog

Today car testing in Arjeplog provides a living for nearly 500 people and they have over 1800 kilometres of winter test tracks. Just outside of town they have even built an exact replica of Britain’s Silverstone race track on the frozen lake (see film link below). Now if only I had some free time and the keys to a spare 911.

Despite all this influx of luxury cars each winter these northern communities are still shrinking in size and facing potentially debilitating de-population. The population has halved since the 1960s as younger and more mobile people have left for bigger cities after the lumber and mining industries declined. But it’s a similar story in my own country, the UK. Look at places such as Middlesbrough, Burnley, Hartlepool, and Hull - who were in trouble already before the financial crisis. Nowadays their unemployment rates are double the national average, and talented younger people are draining away. Then think of the USA and cities such as Detroit. From Motor Town to Ghost Town. The question is do you attempt to save such dying places or focus on the people in them and help them relocate? It’s one of the debates in Place Branding.

So where do these people disappear to? Well when it comes to Sweden its easy to see where they go. Neighbouring Norway has a severe lack of people at all levels, with over 40,000 job vacancies, and Stockholm, the capital of Sweden (and actually Scandinavia!) attracts around 30,000 new people every year, many of them from the north of the country.

But the north of Sweden is now fighting back. In June this year the university town of Luleå, on the coast and about 3 hours by car from Arjeplog, opened the first Facebook data storage centre outside of the USA. It’s one of the most efficient and sustainable data centres in the world. The equipment is powered by locally generated hydro-electric energy and is 100% renewable. Facebook even claim it’s so reliable they have been able to reduce the number of backup generators required by more than 70 percent. The big bonus though is the cooling. The company is using the nordic air to cool the thousands of servers that store all the photos, videos, comments, and Likes. Thumbs up – I like that myself. Talking with Anders Granberg, the man who helped drive the deal, Facebook chose Luleå over other potential sites because of the natural cooling, low cost energy and land availability. Because of the local university Luleå also provided an educated workforce and importantly provided the right environment socially to support the Facebook culture.

Smart thinking by Luleå and what I really like is this way of leveraging natural assets you already have and then working out who would value them. It’s a similar story with the university in Luleå itself. They have also used their seemingly remote and frozen location to stand out from the crowd of universities. They’ve created some impressive marketing ideas and used them to great effect. Their tagline Great Ideas Grow Better Below Zero. The university in Luleå is over subscribed and today has 19,000 students.

All this marketing of chilly assets really started more than twenty years ago with The Ice Hotel, 350 kilometres north of Luleå near the mining town of Kiruna. Getting people to visit a destination that lies above the Arctic Circle in the middle of winter and then pay a premium price for the privilege has to be seen as a truly great marketing achievement. But that’s exactly what The Ice Hotel has done. In 1992 an ice seminar was organised by Yngve Bergqvist, who was looking at ways to improve tourism in his home town of Jukkasjärvi, which lies around 17 kilometres from Kiruna in northern Sweden. An igloo of around 60 m2 containing ice sculptures was built to house the event.

Unfortunately accommodation at the hotel that Yngve managed had run out and so some hardy individuals agreed to spend the night in the igloo. They slept on top of reindeer skins in sleeping bags and the next morning, by way of compensation I should imagine, were given certificates to prove they had done so. Twenty years later The Ice Hotel brand has spread and now there are ice hotels in several countries as well as a successful Ice Bar franchise with Absolut Vodka.

The hotel is constructed every December and lasts through to the following April, when it melts. Each Spring, around March, 10,000 tons of ice are cut from the frozen Torne river to store for building the following winter’s hotel as well as for creating the unique products that the hotel markets, such as glasses and sculptures made of ice. Whenever people or organisations complain about the difficulties they face in attracting people to their particular destination, I think The Ice Hotel is a great example that, despite severe difficulties, any place can succeed given enough focus on what they have that is truly special and some creative thinking.

So what is the future for places such as Arjeplog? Well apart from the flourishing winter car industry testing, I believe changing employment patterns might also hold some hope. Today more and more people are looking to get a better balance between income and quality of life. I met some people in Arjeplog already, who had made the move from the big city to the country seeking a quieter, less frantic lifestyle. They all said they felt like they had so much more time to really enjoy life. Added to this, for certain types of people, employment is going through some radical changes. Thanks largely to technology, more and more of us have the freedom to live and work where we want. More and more of us have the ability to build our own lifestyles and incomes.

It’s what I call E-Ployment*. Technology, such as the cloud, is changing the employment landscape dramatically and many people are now seeking out alternative employment, combined with a higher quality of life.

What’s exciting about that is, just maybe, it will provide a potential lifeline for places like little Arjeplog, as more and more people swap the stresses of big city living, for places providing more time to really enjoy life.

If you want to get an idea of what Arjeplog is like in the depths of winter take a look at the You Tube / Top Gear link below.

Download this free book chapter from Wish You Were Here: The Branding of Stockholm and Destinations

Digital Place Branding UP FOR REAL See all
Home