A Case for Place Branding in Cardiff, Wales

I've lived in Sweden a good few years now but my Swedish doesn't appear to get much better. I speak what I call ICA Swedish (ICA being the name of the local grocery store, where I can make myself understood pretty well, but that's about it).

One Swedish word I do know however is Lagom. It's a word that is central to the Swedish psyche, and in fact pretty much everything else that has gone on in Sweden for the last few hundred years. It means just enough – but never too much. It's about being average. Everyone being the same – equal.

Now I've battled this word for a good number of years, as average is not really something I have an affinity for and I've come to the conclusion that Lagom is so embedded in the Swedish way of life, it can never be removed. Which is probably why they'll never win a world cup – but that's another story.

In my work with cities and place branding I find that far too often most places are Lagom in the way they approach their marketing. The positioning of cities, what they stand for, is key in their successful marketing. Too many places end up doing something average, creating what I call wallpaper positioning - trying to be all things to everyone and in so doing achieve and stand for very little.

Cardiff, the capital of Wales, is certainly not a lagom city. I was recently asked to be a keynote speaker on City Branding at the Capital City Vision Event in Cardiff. They asked me to talk about my experience with the branding and marketing of Stockholm and other places.

I realised I had not been to Cardiff in well over 20 years and when last there it was not particularly a city I had looked forward to visiting. Wales was a place I knew well however, having spent many holidays on the west coast, Cardigan Bay. Added to this my grandmother, now sadly no longer with us, was Welsh. She was from the valleys. So, in the words of Granny Stubbs, 'I had a bit of an affliction for Wales'.

So back to Cardiff. What a spectacular difference to the city of my youth. Modern Cardiff is a welcoming and interesting place with a dramatically changed architecture from when I knew it. The millennium Stadium is spectacular. It looks like something from another planet, that has been dropped from the mother ship to fit perfectly into the centre of the city. I walked round all sides of it in awe. Built for the 1999 Rugby World Cup, it's hosted many other great sporting events, including one of the most memorable FA Cup Finals ever, between Liverpool and West Ham (which after extra time and a 3-3 score, ended up with Liverpool winning on penalties).

There are several things I really like about the Millennium Stadium. One being that it's right slap–bang in the centre of the city. It gives it a very special feeling, for such a major stadium. The other thing I love is the cost – at somewhere under 150 million pounds, it makes Wembley Stadium, which cost closer to 750 million, look incredibly expensive and actually a waste of money. I know which I prefer.

The list of other dramatic new architecture in the city is impressive as well – the Millennium Centre, Richard Rogers Senedd (or Welsh Senate building) and the fantastic new Cardiff Bay Development. By 2018 the new BBC Wales head office will house 1200 staff right in the very heart of the city. Today the city is already home to many well known BBC productions, most notably Dr.Who (check out the Dr Who Experience if you're into Daleks).

Love Cardiff. Or I'll exterminate you.

I had my family with me and we walked the city streets one evening looking for a good restaurant and we were spoilt for choice (we eventually chose a Brazilian restaurant called Viva Brazil, where the Passadors, or meat carvers, move from table to table, offering fifteen different cuts of meat.)

Walking through The Hayes and around the St Davids Centre the choice and variance of restaurants and food is spectacular and again a far cry from the fish and chips city of my youth. 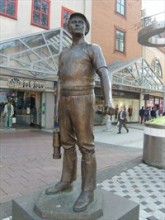 The Miner by local sculptor Robert Thomas, is a reminder of the sweat and blood that the city of Cardiff is built upon. It makes the point wonderfully well of how very different, and comparatively easy, our modern day life is.

The St Davids Centre development is by renowned architect Eric R. Kuhne and his company Civic Arts. The centre combines leisure, retail, entertainment, office, and residential spaces into a vibrant new centrepiece in the very heart of the city. I had the huge good fortune that Eric was one of the other keynote speakers on the platform with me in Cardiff and what a speech it was covering as a professional many of the things I appreciate about good urban thinking and design.

Eric is the founder of Civic Arts which he describes as 'a research and design practice dedicated to rediscovering the pageantry of civic life'. Civic Arts is currently building both mixed-use and specialised projects on four continents, from urban regeneration schemes to entire city master plans. He believes that 'the city has been, and always will be, the ultimate ‘Marketplace of Ideas.’ As a city person it's sentiment I can easily embrace.

It was a true pleasure to listen to Eric's speech and share the same platform as such an urban visionary.

Tim Williams CEO of The Committee for Sydney

Another key participant at the Capital City Vision Event, was Tim Williams – CEO of The Committee for Sydney. Tim, a proud Welshman, was formerly CEO of the Thames Gateway London Partnership where he made the Gateway in East London the key urban regeneration project for London and indeed the UK. Tim is recognised as one of the leading urban renewal thinkers and practitioners at work in the field, with an international reputation.

Tim's brilliant speech focused on the future of cities. People are flocking to cities and most interestingly back to city centres. The dream of our parents and grand parents of living in suburbia is in full reverse. Thirty years ago inner cities had connotations of being dangerous, low quality slum districts but today more and more people want to live in the heart of cities. The easy access to amenities, connectivity and being able to conduct daily life in a simpler, lower cost way are some of the major drivers. These new urbanites offer many benefits to society as well, such as reduced carbon footprint as daily commutes are impacted and with people living in smaller city centre accommodation.

These people are educated and seeking knowledge based jobs as well. This phenomenon is what the demographer William Frey has in mind when he says “A new image of urban America is in the making. What used to be white flight to the suburbs is turning into ‘bright flight’ to cities that have become magnets for aspiring young adults who see access to knowledge-based jobs, public transportation and a new city ambiance as an attraction.”

Place Branding: The Drivers and Issues

My own speech in Cardiff focused on three aspects of developing a strong city brand. Firstly I looked at some of the drivers for city branding such as the attraction of tourists, inward investment as well as new tax paying residents.

Place and city branding is one of the most complex marketing tasks that can be undertaken and has to involve a high degree of stakeholder contact. Identifying and involving the key stakeholders is central to any place branding strategy.

Finally I looked at positioning, which goes to the very heart of place branding. Here I referenced my own work for the city of Stockholm and its positioning as The Capital of Scandinavia.

Place branding has grown enormously in the last ten years and as one place markets itself, very other place has to. Many of the disciplines of consumer marketing apply however to place branding. Like a traditional brand, places need to develop long term strategies. These should have a ten and twenty year perspective and not change with every political cycle. This means politicians need to be engaged early on and the strategy needs to have cross political party agreement to have a long term future. Stockholm’s has been in place now over ten years and has been through different political administrations successfully. Building strong place brands can have a remarkable impact on cities. Just take the case of Barcelona. Today it is seen as one of the world’s most successful cities.

However, it was all very different forty years ago. In the 1975 series Fawlty Towers Manuel, the hapless Spanish waiter who lived in fear of Mr Fawlty, was cast as coming from Barcelona. His home town was chosen with great care – as at that stage Barcelona was considered by many foreigners to be a run down, dirty, industrial black hole.  It wasn’t until the death of Franco in 1975, that a new regional focus was put in place to get the city back on a path to regeneration. One of the key springboards in the strategy was the winning, and hugely successful staging of, the 1992 Olympic games, Barcelona is one of the few destinations to have run an Olympics at a profit.

More than most places, the case of Barcelona proves that it is possible to turn around the fortunes of a city given the right strategy, a high degree of stakeholder involvement, focus and – most importantly – investment. The Barcelona case was, I felt, relevant to my Cardiff presentation. Cardiff has been through a remarkable transformation since my youth. It’s already impressive. But the UK needs to embrace a more decentralised approach. London still dominates but turning the UK’s regional cities into new economic power houses would have tremendous benefits for the entire UK economy.

I was asked what one word I would use to describe Cardiff and spontaneously I replied passion. It’s a city with genuine passion and pride. You can feel it in meeting the local people and politicians. Lagom? Certainly not. Cardiff is a place that deserves to succeed and stand out. As the Capital city of Wales it also has a gravitas that most cities can’t match. Cardiff has yet more potential to offer and I believe the best is yet to come. Granny Stubbs, my Welsh grandmother, would be proud.

Watch an extract from the Capital City Vision speech.

Learn more from experts in this free book chapter on Working with Stakeholders: Re-thinking Place Branding from a Practice Perspective.

Place Branding International UP FOR REAL Identity See all
Home