Five mistakes that can mess up your market research

Highlights from INBOUND 2021: From new features to latest trends

Dagens Industri Featured Article About UP

UP THERE, EVERYWHERE was featured this Monday 2nd March in the Entrepreneur section of Dagens Industri, the leading daily business newspaper in Sweden.

The feature's headline was 'The Agency That Grows With No Employees'. The article focused on the agency's rapid growth, and unconventional membership model and business platform. The article had interviews with Julian Stubbs, CEO of UP, and Malin Nyberg, as a member.

The article is available in Swedish at this link.

Read the English Translation below. 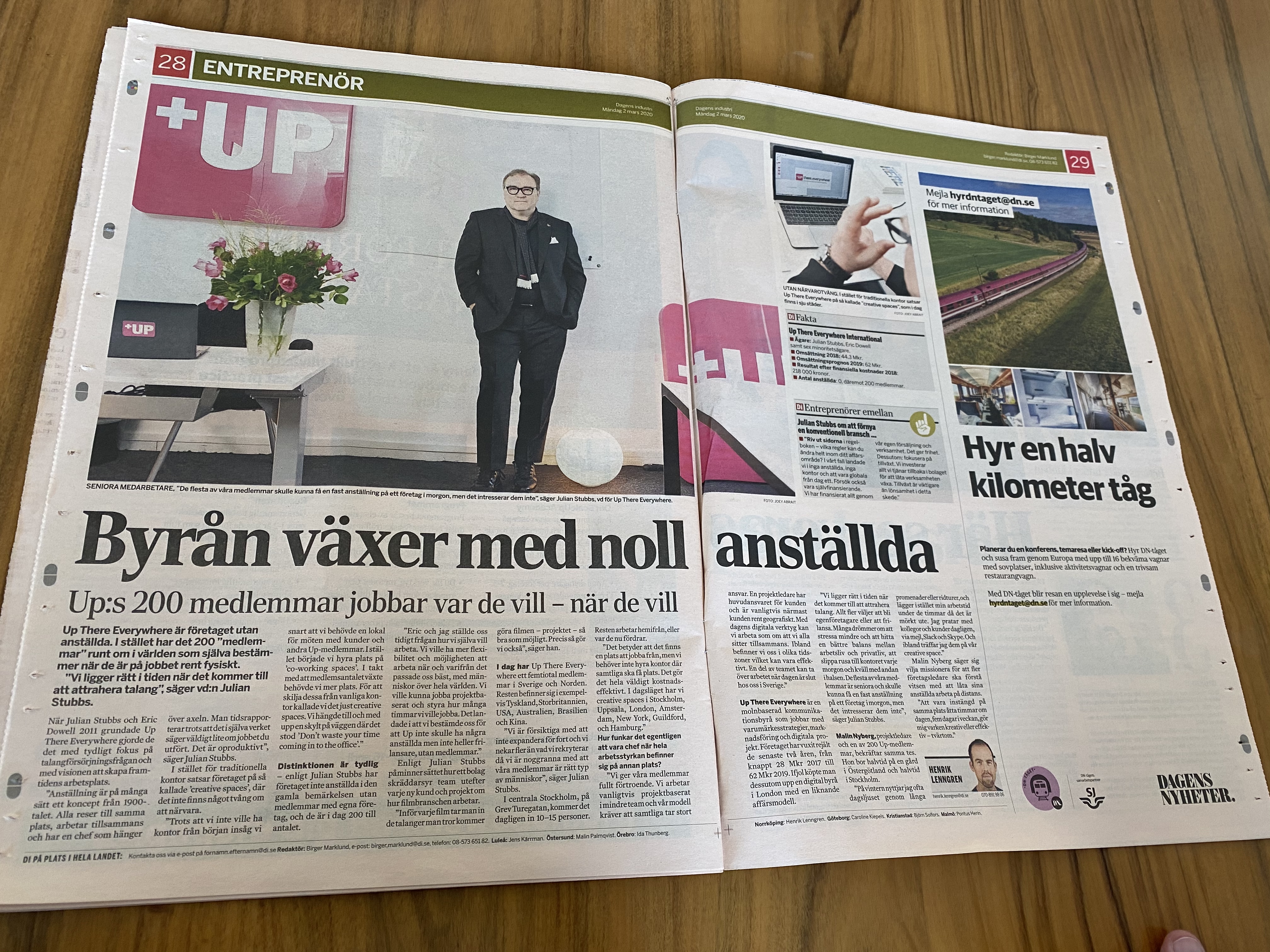 The agency that grows with no employees

UP THERE, EVERYWHERE is the company without any employees. Instead, they have 200 "members” spread around the world who decide where and when they want to work. "When it comes to attracting talent, our timing is right,” says CEO Julian Stubbs.

When Julian Stubbs and Eric Dowell founded UP THERE, EVERYWHERE in 2011, they did it with a focus on talent and to create the workplace of the future.

"Employment is in many ways a concept from the 19th Century. Everyone travels to the same place, works together and has a manager hanging over their shoulder. You fill in time sheets despite the fact that it actually says very little about the job you have done. It’s unproductive," says Julian Stubbs.

Instead of traditional offices, the company have so-called "creative spaces” where people can work if they like, but they don’t have to.

"In the beginning we didn’t want any offices at all but eventually we realised we needed space for meetings with clients and other UP members. So, we started renting space at coworking spaces and eventually we needed more room as our membership grew. To separate this from an ordinary office, we called it just a Creative Space and even hung up a sign on the wall that reads, "Don’t waste your time coming in to the office.”
The distinction is clear, according to Julian Stubbs. The company does not have any employees in a traditional sense but members with their own companies. As of today, UP has 200 members.
"Eric and I asked ourselves how we wanted to work. We wanted more flexibility and the opportunity to work when and where it suited us, with people based all over the world. We wanted to be able to work project-based and be in control of the number of hours we worked. We ended up agreeing that UP wouldn’t have any employees but neither any freelancers – we would have members."
According to Julian Stubbs, the way the company puts together a team for each new client or project is similar to how the film industry works. Before making a movie, you choose the talents you need to make the film – the project – as good as possible. That’s how we do it as well,” he said.
Today UP THERE, EVERYWHERE has about 50 members in Sweden and the Nordics. The rest are in for example in Germany, UK, US, Australia, Brazil and China.
"We are careful to not expand too fast and we reject more applicants than we accept, as we are keen on our members being the right kind of people,” says Julian Stubbs.
In Stockholm’s Grev Turegatan, around 10-15 people come in on a daily basis. The rest work from home, or wherever they prefer.
"This means there is a place to work from, but we don’t need to rent an office where everyone needs a desk, which makes it very cost-effective. We currently have creative spaces in Stockholm, Uppsala, London, Amsterdam, New York, Guildford and Hamburg.
How does it work to be a manager when the entire workforce is in a different place?
"We trust our members. We usually work in project-based smaller teams and our model requires that everyone takes great responsibly. A project manager has the main responsibility for the client and is usually closest to the client geographically. With the digital tools of today we can work as if we are in the same room. Sometimes the team members are in different time zones, which can be effective; one can take over the work when the days is over for us here in Sweden."
UP THERE, EVERYWHERE is a cloud-based communications agency that works with branding, marketing and digital projects. The company has grown substantially over the past two years, from a revenue of 28 million SEK in 2017 to 62 million SEK in 2019. Last year, they also bought a digital agency in London with a similar business model.
Our timing is right when it comes to attracting talent. More and more people are deciding to become self-employed or to freelance. Many dream of a less stressful life with a better work-life-balance, not having to rush into the office every day. Most of our members are senior-level and could get a permanent job at a company if they wished, but they’re not interested,” says Julian Stubbs.
Project manager Malin Nyberg is one of UP’s 200 members and confirms that. She lives half time on a farm in Östergötland and half time in Stockholm.

"In the winter, I often choose to work when it’s dark outside and make use the daylight by going for long walks or horse trekking. I talk to colleagues and customers daily, via email, Slack and Skype. And sometimes I meet them in our creative space."

Malin Nyberg says she wants to encourage more business leaders to understand the benefits of letting their employees work remotely. "Being trapped in the same place eight hours a day, five days a week, makes me neither creative nor effective – quite the opposite."
(Swedish version) by HENRIK LENNGREN Published: 02 March 2020, 19:45, Dagens Industri