Improving your content's digital accessibility for all people

By Kia Irving | UK
UP NEWS

UP for DIGITAL’s Alice Smith announced as one of t...

Once upon a time … while working in the cloud

This series of blogs looks at some of the other pursuits, outside of UP, that members pursue with passion...

Once upon a time, I was scrolling through my UP inbox when my eye alighted on an email from Anne Burrows, account handler extraordinaire.

“Would you be interested in illustrating a children’s book for another member of UP? Really nice guy by the name of Julian Reisz.”

So began a 14-month collaboration with Julian Reisz, during which time the world grappled with the scourge of Covid-19, I dealt with the pressures of lockdowns, trying to keep the proverbial wolf from the door, and Julian contracted Covid itself.

Naturally, as an artist and illustrator, I was delighted to accept the brief.  It was not just the thought of the fee that motivated me. It was, after all, for a good cause, a cause very dear to Julian’s heart.

In Julian’s own words:

“When our daughter was two, she was diagnosed with DDH [Developmental Dysplasia of the Hip (DDH)]. That meant her hip socket was the wrong shape and her thighbone was totally dislocated. It was such a tough time, with three operations and major surgery. We needed something positive and joyful to cheer us up. So I made up a story about a squirrel who gets a new striped tail.”

I’m delighted to say Julian’s daughter has made a full recovery. Indeed, now she plays basketball and dances around just like a squirrel. (Read more of the story here). 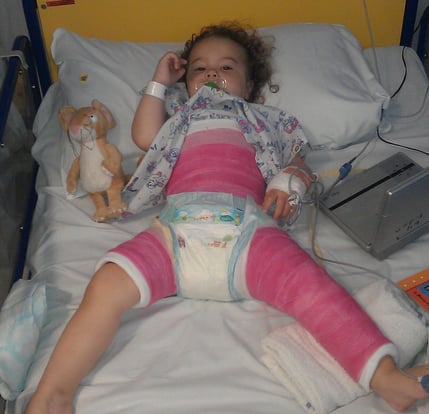 So, this wasn’t a mere corporate job. It was something that really mattered.

I had to get it right. Julian and his family had had a terrible time. I was not a little daunted at the prospect of bringing this story to life. What should the squirrel look like? Should I paint it? What should be left out? Whatever I was going to do, I did know one thing: I was going to give it my all.

Which brings me to the story itself. Although it went through a number of rewrites, it tells of Hazel, a young squirrel whose tail is yanked off as she falls from a great oak tree. Her father steals out at night to gather some wool and knits her the most gorgeous tail in her favorite colors.

Cast in the form of an allegory for DDH, in particular, and how we can overcome adversity with love, was a story that would appeal to child and adult alike. 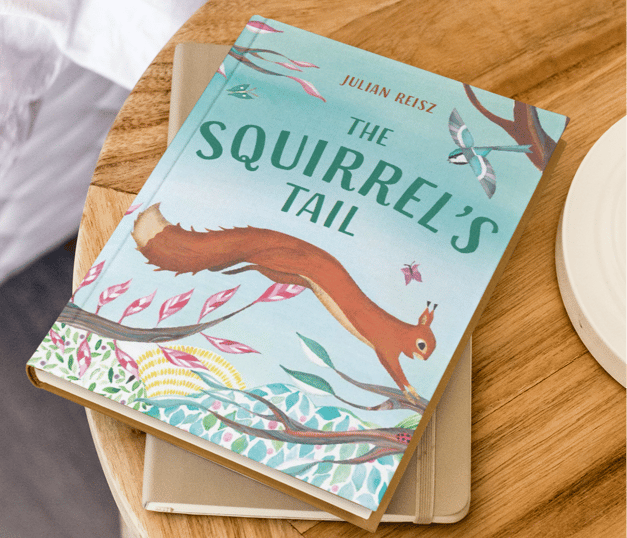 Working with Julian has been a pleasure throughout. Indeed, I’d go so far as to say he’s the best client I’ve ever had. Despite never meeting him in person (and I do hope I can remedy that at some point) we got on famously and the process of collaboration (although not without the odd hiccup) went smoothly.

But why? Yes, he’s a nice chap. Yes, he’s a talented marketing man. Yes, he knows what it’s like to work with clients, good and bad and, yes, he knows how to manage a project.

But, I felt there was something else going on and then it hit me: UP! That’s what we had in common. He and I are both schooled in the ways of UP and it was this that had put us in such good stead for the project. We are old hands at remote working and for my part working for UP has helped me hone my skills enormously. We both know the importance of a good brief, how to use the cloud and the various digital tools at our disposal, clarity of communication, dealing with amendments, false starts, deadlines, creative cul-de-sacs and changes of tack. The list goes on and on.

It’s not that UP owns these methods of working. Rather, it was its ethos which helped us: striking a balance between life and work, making the cloud work for you, flexibility and the vital importance of self-responsibility. We may not have been aware of it at the time, but in hindsight, it’s plain to see UP helped us to work smarter in this creative endeavor.

Video about the book project

Interested in buying a copy? You can get it here.

For the UP business model (known as e-ployment) while not perfect, brings numerous benefits. It is robust, able to cope with the vicissitudes of a fickle world economy and indeed a pandemic, the like of which we have not seen for a century.

From the first, UP has treated its members (I almost said ‘employees’), not as mere machines, but as a people. Many companies pay lip service to this, but for UP it is a founding principle, an article of faith.

But the greatest gift UP gives you is this: freedom, freedom to work when you want and where you want. And this is thanks, in part, to the cloud. It lets you be master of your own fate and not at the beck and call of a boss. This can be daunting for some, liberating for others.

And because you don’t have to be imprisoned in an office anymore, UP saves you time by eliminating the need for the dreaded commute, which is good news for the environment.

(I wrote about this before: Cloud-based working: a sustainable business model for the future)

The UP way of working

UP gives you a high degree of flexibility because UP members are independent, yet bound by a common and shared purpose. And although UP is a community of individuals and not a network, because it uses uniform platforms, tools and processes, everyone is all on the same page.

In short, the UP member brings certain skills to the table. UP’s systems and processes do the rest.

This in turn enables you to strike a balance between work and life; indeed it sometimes blurs the line between the two. If you need to meet clients or colleagues, face to face, then there are always the creative spaces. But crucially they are only used if the need arises.

Of course, remote working puts the onus on you to take responsibility for your work and financial affairs. UP is no exception. If you’re sick and tired of the old 9-to-5 paradigm, this is a good thing.

Make no mistake: it is not for everyone, but if you are a maverick with iron discipline who can deliver come what may, if you yearn for a healthier work/life balance and if you don’t like bosses, then UP will suit you nicely.

Related: How to join UP?

Now, it’s time to shine a light on some of UP members’ creative pursuits and side projects. There is, then, a sense in which UP is a self-organizing entity. Its order arises from the collective interactions of individual components (i.e. UP members) guided by standardized processes and methods. Without them, it would be chaos and UP would not be the success it is.

Read more about the UP model: e-ployment