Creativity. Thinking out of the box

I’m one of those lucky ones who got to get up in the morning, go to work and spend at least 8 hours a day doing exactly what I wanted to do. Creating ideas, visualizing them and bringing them to life. And in the process of doing exactly what I wanted to spend my life doing I got the great fortune of working with loads of like-minded people that shared the same passion. Creative people all with a talent for turning an idea into a statement that triggers a response.

I’ve also had the great privilege of waking up and going to work in New York, London, Princeton and Stockholm, which to me represent some of the most inspirational places on the planet for generating creative ideas. As a result, I’ve come to know people from all over the world. People who brought different influences, skills and experiences to the creative process – all to its betterment. The expression “All work and no play…” never applied since work always seemed like play. In truth, the only thing that could be described as work was the process of getting up and going to the office. Maybe that’s because I’m a bit of a night owl – constantly burning the midnight oil having fun doing what some people call a job. 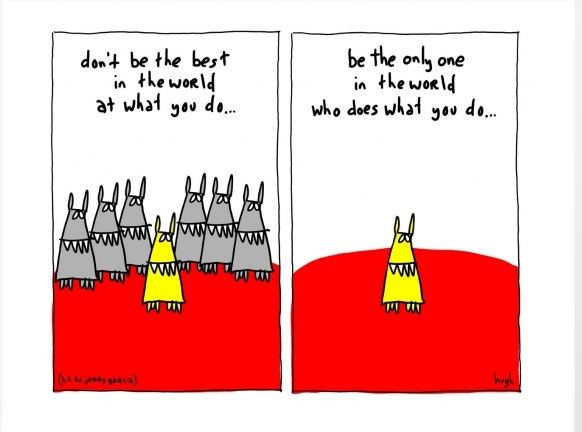 Where ideas come from

Recently, I was asked where do come up with your ideas? Answering the question created a chain reaction of thoughts and memories that ultimately led to the creation of UP THERE, EVERYWHERE. In reflection, defining a specific space and time to come up with a creative idea usually led to a sense of forced frustration and comments like “let’s meet again later to come up with something better”, “glad we’ve got another day on this” or “when’s the deadline?”

In contrast, the seeds of the best ideas were created in the most unexpected places and times – at lunch or dinner, in the park, walking down Madison Avenue, Oxford Street, or Kommendörsgatan, on the weekend, cleaning the house, in the shower, on the train, in the car, on the plane, pretty much any place that wasn’t strapped to a desk or dictated by a scheduled time for creativity. It’s not to say ideas didn’t happen while sitting at a desk in the office, they did, but they weren’t usually the ones that were the best

Ideas tend come freely and the creative mind works best if it is set free from the constraints of planned creative moments or places for that matter. A good example was the one conceived on vacation in Spain. Relaxed, put the book down, couldn’t help it, the thought just came. Another was scribbled on a tablecloth over dinner in San Francisco after 3 days of workshops. The issues were fresh in our minds and the ideas flowed easier than San Pellagrino. A third was created at a hotel bar in NY at the end of the traditional work day – an idea conceived over a discussion and a drink that led to over three years of work.

Frankly, the tradition of repetitiously going to the same place 5 days of week and sitting in the same spot doesn’t conjure up thoughts of Alice in Wonderland – or even a great blog for that matter. And considering the mobile world in which we live, with the internet, Skype and iChat, cloud computing and a multitude of other ways to be in contact with everyone, everywhere, no matter where they are in the world, why maintain a rigid 9-to-5 Dolly Parton style philosophy built around a non-mobile tenuously connected society?

It‘s a new age. There is a new way of working. Inspiration comes from the interaction between people, sharing ideas, experiencing new places. Technology provides creatives limitless flexibility in the way they work today – well beyond the walls of an office. It’s time to set them free to wonder with whomever (as long as they have signed a NDA) whenever and wherever they please. Just imagine what they’ll dream UP next.